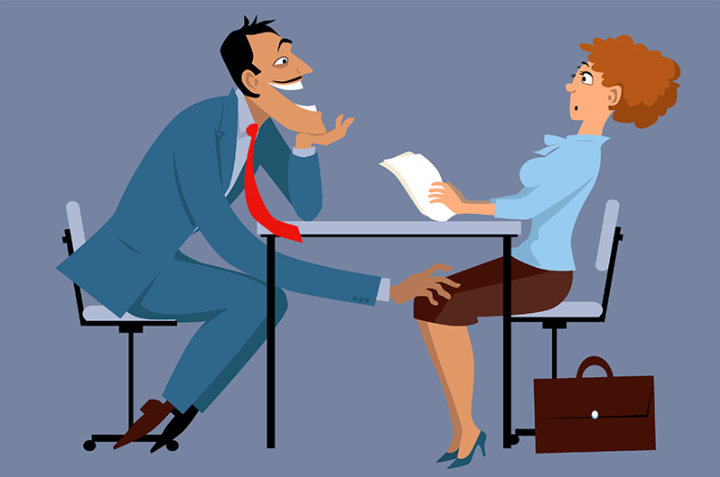 For the past few years, there has been a push for more women in the workplace, especially in fields that are predominately male. While more female representation is needed in spaces dominated by men, the reality of being a woman in these workplaces is often ignored or disregarded. There have been famous women in the media, such as Lena Dunham or Gabrielle Union, who have come forward with personal experiences of sexual assault and harassment that they have endured while at work; however, harassment and assault are not only experienced in the entertainment industry. Women in Canada experience these hardships every single day.

After reaching out to female students at Acadia University, the commonality of crimes at workplaces against women can be further supported. Violence against women is in our backyard and can no longer be ignored. Thank you to the brave women who shared their stories with The Athenaeum and Acadia Community:

“The dress code at one workplace was fairly relaxed and we were allowed clothing that was considered to be more casual. I wore shorts to work one day and they ended up being slightly shorter than my apron which went past my knee. From the front, it looked like I was naked. When my manager noticed, I apologized because I did not realize that the apron went past my knees and he responded: ‘That’s okay, we will get more tips if you look like this’.” – Harper T.

“We had to do this interview in one of my classes. I was working with a male student to interview an older man for the class. The individual we were interviewing refused to make eye contact or direct his responses towards me, even when I was the one asking questions. It was like I wasn’t in the room. He then followed by stating that all of Windsor’s problems (which we were discussing in the interview) began when women started driving.” – Claire Leffler (CODE Student)

“A co-worker once cornered me in the break room and tried to force himself on me. I was lucky enough to escape the situation, thanks to someone who was in the bathroom at the right time. It was my second week there.” – Jada F. (Chemistry Student)

“I have had colleagues who would rub my back and whisper things in my ear while we talked. I never allowed my colleagues to enter my personal space or touch me. They behaved unprofessionally and made me feel weak.” – Eva Munez (Biology Student)

“I am hoping to go into sports law, specifically for hockey. There is this union called the NHL players association where all registered agents and lawyers are usually affiliated. In this union, there is only one woman. When looking at specific companies within the union, all female employees are only at the secretarial level. These women go towards the companies’ statistics when looking at whether women are properly represented, yet only one individual at one company has equal standing to the men in these companies. While this story isn’t about violence, it shows how even though it is 2020, there is still changes to be made.” – Hunter Murchison- Doggart (Politcs Student)

Acadia University is much smaller than most universities in Canada, but still has students who have been harassed, objectified and demeaned in the workplace. Even if the students in this article are Acadia’s only students who have faced workplace harassment, it still doesn’t make any of this okay or anomalous. Bigger universities have more students and may have more stories of this kind. As we move outward, think about how many women in our country or worldwide might share in these workplace experiences. Yet, as a society we often forget about the reality of harassment in the workplace.

Just because women don’t talk about their own instances does not mean they don’t experience them, not everyone is okay with sharing. Society has always taught women to stay silent, so for the most part that is what women do. Those who do speak out are often criticized in the media or called liars because the individuals they are accusing are often well known or in a position of power.

The #METOO movement that first gained traction in 2016 was essential for women who had been silenced. They finally felt supported and safe enough to share their personal stories. #METOO swept across borders uniting women of all nationalities. Eventually, the movement died down, as all movements eventually do. While the message of the movement still remains, so does the stigma surrounding speaking out. I’m sure #METOO will be re-ignited again years from now, but if people revert back to silence during this lull in momentum, nothing will be different years from now.

If these students’ stories tell you anything, it is to be alert to the situations taking place in your community. I challenge anyone reading this to ask your friends and family if they have been treated similarly. Chances are that someone will have a story to share, small or big. No matter the level or harassment, it is important to listen to community members who confide in you. Women need to stick together.

You can always be part of the movement for change. Keep the conversation going on social media, with your family and at school. Strive for a better world where women are well-represented and feel safe going to their jobs. Most importantly, support the women in your lives.

Rylie Moscato is a third-year Honours English major and the Editor-in-Chief at The Athenaeum. View all posts by Rylie Moscato