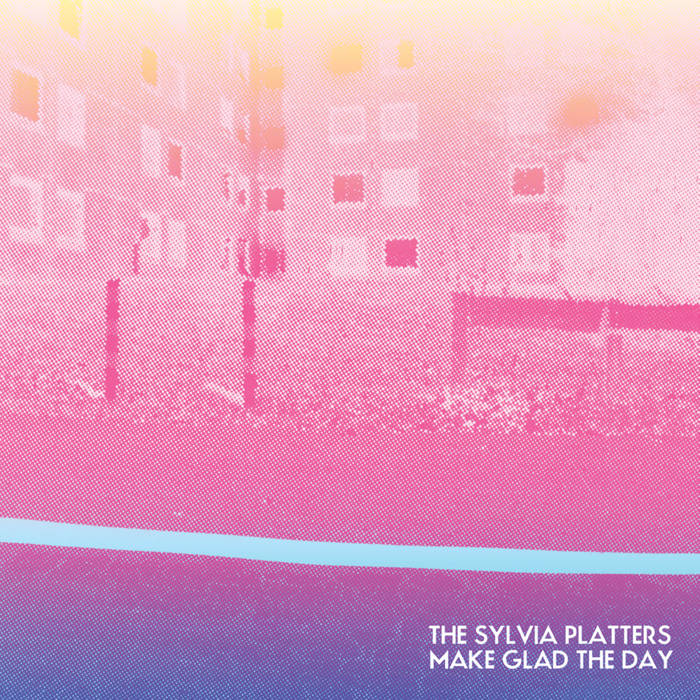 The Sylvia Platters are a power pop trio from Vancouver, British Columbia. Self-described as a “a power pop band inspired by the brevity of Guided by Voices, the loud-quiet dynamics of Mikal Cronin, and the punk playfulness of The Replacements,” they have recently released an album titled Make Glad The Day, and before I start off with the review, I would like to apologize for my lack of knowledge of the nuances and intricacies of power pop.

The press manifesto describes the album as a way “to turn life’s string of ephemeral moments, jobs, ideas, and relationships into something meaningful.” I really do get what they are going for here. There’s an offsetting – yet endearing – je ne sais quoi. Amalgamating – so beautifully – the jarring disconnect of an urban life, and life’s inanity. In essence, it’s a love letter: a letter so abrasive and standoffish, that it becomes so blatantly apparent that it is merely a theodicy for a city. This is where I really get the album: it is equal parts meaningless drudgery, and equal parts a chokehold on vacuous happiness that is slowly coming loose. Because no matter how tightly it is held onto, it manages to become a completely different entity. All of this is packaged into a compact, half-hour runtime spanning fourteen tracks. Sonically, it hits like a wall of sound, incorporating elements of punk, shoegaze, and glam rock. The medium is concerted with the message. Do not mistake the rhythmic power pop sound as an undercut of the true message of the album. It bobs on vicious vitriolic vindication.

My praise is not to say that it doesn’t have its imperfections. Sometimes the songs meld into one. While I can hear the influences of Cronin and the Replacements in the songs (especially in drum heavy sections), the variance between the songs tends to be low. While the songs do hit like a wall of sound, it is difficult to differentiate between the walls. They’re all painted the same way. In a way it becomes referential to itself, a triptych of the same salient walls of sound. It’s influences crack around the edge. Leaving the album desperately clamoring to find a voice of it’s own – an entirely new one that effectively communicates a melancholic topic without leaving it a lumbering mess of heyday referentialism. The Sylvia Platters have yet to hit that spot, but it is excusable for their debut.

Prima facie, this album was a wholly enjoyable ride. It’s laden with some eerily relatable emotions, and the lyrical content is of a caliber that is extremely deserving of the 21st century schizoid man. A pigeon lost between granite graveyards, and bills, and work. Yet the album strives to not be bleak; it’s fun, and it’s fast. I do have some problems with differentiating between the band and their influences. But in due time I do expect them to find incredible footing, and a unique voice that laments with apparent glee.

Listen to Make Glad The Day