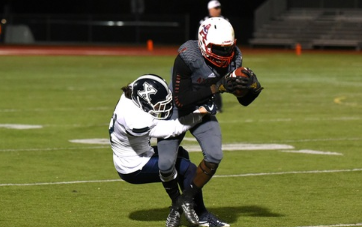 WOLFVILLE, N.S. – The U SPORTS No. 8 Acadia Axemen improved to 6-0 and clinched first place in the AUS standings with a 44-25 win over the visiting StFX X-Men.

Undefeated, the Axemen got a little help from the Bishop’s Gaiters who handed Saint Mary’s their third loss of the regular season in tonight’s other AUS matchup. The Huskies fall out of contention for first place in the AUS standings and drop to 3-3.

Two Ben George field goals and a touchdown by X-Man Chase Bowden gave StFX their only lead of the game at 7-6. Glodin Mulali‘s Acadia record-breaking kickoff return of 111 yards launched the Axemen into 13-7 lead and they never looked back.

An exchange of two Ben George rouges and a 17-yard field goal by StFX’s Keiran Burnham gave the Axemen a 15-10 edge going to halftime but Mulali struck again.With only seconds remaining on the clock, Mulali turned a shallow pass into a 74-yard reception to give the Axemen a commanding 22-10 at the half.

Burnham opened the second half with a 56-yard punt that added a single point rouge to the scoreboard. Senior receiver Cordell Hastings hauled in a 22-yard touchdown pass that concluded a seven play, 90- yard drive to give Acadia a 29-11 lead. George would add his third rouge of the night before Jacob Fenchak scored on a 26 yard pass completion in the final quarter for the Axemen’s fourth major of the game.

X-Men finally responded on an Isaac Fagnan 32-yard pass reception to close the gap to 37-18.

Acadia solidified the win with a 16-yard pass reception by Cam Morley for the Axemen’s last touchdown of the night and a 44-18 lead.

In the dying minutes of the final frame, Michael Forsey posted the final scoring play of the game on a 16-yard pass reception.

X-Man Isaac Fagnan led all receivers with 148 yards on 6 receptions.

StFX pivot Quinn Stewart was 21 for 34 pass attempts for 346 yards, while Acadia’s Hunter Guenard recorded 18 completions of 33 attempts for 313 yards.

Acadia accumulated 510 yards on the ground and in the air compared to StFX’s  435.

The defending AUS champion StFX drop to 1-6 and will wrap u their season at Saint Mary’s on October 26, while the Axemen host Saint Mary’s next Saturday afternoon. Acadia concludes the regular season on the road at Mount Allison on October 26.

The Axemen will now await the winner of the AUS Semi-final game scheduled for November 2. Acadia will host the AUS Loney Bowl Championship game for the second time in the last three seasons.