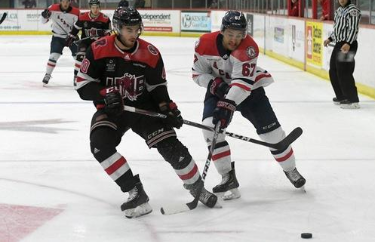 WOLFVILLE N.S. – The Acadia Axemen closed out the opening weekend of AUS regular season play with a statement 6-4 win against the reigning U SPORTS Champions, the UNB Reds.

Saturday night’s match-up between the UNB Reds and the Acadia Axemen began with one of the quieter periods of hockey this year at the Andrew H. McCain Arena. Neither team found the back of the net as both Acadia goalie Logan Flodell and UNB goalie Samuel Harvey were rock solid between the pipes, making 11 saves each.

UNB opened the scoring, just under five minutes into the second frame. Tristan Pomerleau circled from the Acadia blueline and darted down the left-wing boards, before driving the net and finishing off his own rebound through the five-hole of goalie Logan Flodell. The goal was assisted by Stephen Anderson and Patrick Watling.

Axemen Captain Liam Maskaant responded with his first goal of the season after a 3 on 2 rush concluded with Maskaant’s wrister being deflected into the top corner over the UNB goaltender’s glove. Eric Henderson and Jordy Stallard grabbed assists on the play.

It took only a minute and ten seconds later for the Axemen to add to their lead when Mason McCarty buried his first in an Axemen sweater after deflecting Garrett McFadden‘s point shot into the UNB goal. Jordy Stallard notched his second assist of the night on the goal.

The Varsity Reds were quick to close the gap in scoring as Mark Rassell grabbed his first of the season tipping in teammate Matt Murphy’s point shot. The powerplay goal came 12:45 into the frame and was also assisted by Matt Boucher.

UNB would get the last laugh of the period as Alexandre Goulet tied up the game after tapping in a cross-crease feed from Patrick Watling with only 0.8 seconds remaining in the second.

The teams headed to their respective locker rooms for the intermission tied up at 3.

UNB’s Tyler Boland opened up the scoring at 4:23 of the third, finding a loose rebound and tucking it past Logan Flodell after he made the initial save on Stephen Anderson’s shot. Joe Gatenby got the second assist on the goal.

Only 2 minutes later Axemen defenceman Garrett McFadden tied up the game on the powerplay with a rocket slapshot from the left point that traveled through a sea of bodies before beating Harvey to the low glove. The Subway First Star of the Game, Jordy Stallard, added his third assist of the night and Morgan Nauss grabbed his second in as many games.

With 12:50 having passed in the final frame, the Subway Third Star of the Game, Mason McCarty, grabbed his second goal of the night and gave the Axemen the lead with a seeing eye shot through a screen eventually beating Harvey to the high glove. The powerplay goal was assisted by Cristiano Digiacinto.

Just over a minute later Jordy Stallard added a goal to his three assists with a quick shot in front of goal after a great breakaway pass from Ryan Foss.

The game would end with the Axemen taking it by a score of 6-4.

Acadia hopes to ride this wave of confidence into next Friday when they play Dalhousie in Halifax.

The Reds will be looking to bounce back when they play their next regular season game October 11th against Moncton.