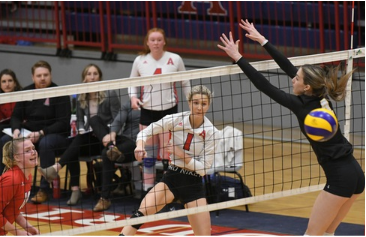 WOLFVILLE, N.S. – The Axewomen volleyball team stunned the visiting U SPORTS No. 2 ranked Dalhousie Tigers with a three-set win in Sunday afternoon play. The Tiger loss is the first match lost since February 15 last season.

“Today was a great team win! We had multiple individuals rise today which contributed to our success,” said Axewomen head coach Michelle Wood. “There is always emotion involved in any match that we play, however today in particular the team played for the senior athletes that have helped build our program. Ultimately, we accomplished our goal today, but our sights are still set on something greater. The beautiful part about sport is that it’s the moments along the way that help propel programs.”

The undefeated Tigers jumped out to an early 5-2 lead in the opening set, but the Axewomen tied the game up at six on a Dalhousie attack error. A kill by Peyton DeWolfe sparked a run that ended at 13-7 on an Acadia service error.

The Tigers battled back to tie the match up at 14 on a Victoria Turcot service ace, but the Axewomen once again took control and the lead. The action was neck and neck until 20-20 when two Dalhousie attack errors combined with a Jamie Crocket kill and a Hannah Helm service ace ended the set at a 25-20 win for the hometown Axewomen.

More of the ‘see-saw’ battle continued into the second set with no more than two points separating the teams until a 12-12 tie was broken by a kill by Bianca Ruiz triggering a rally that included three Lucy Glen-Carter service aces in a row, a Hannah Helm kill and another Glen-Carter ace to give Acadia a 20-13 lead.

The Tigers responded six-point rally, but it wasn’t enough and the Axewomen collected a 25-22 second set win.

Could the Tigers face a three-game sweep? Once again only two points separated the teams in the opening minutes of the third and eventual final set.  Dalhousie pushed to a 9-6 lead on a Victoria Haworth service ace and an Acadia attack error, but the Axewomen would post another rally to give them a comfortable 12-9 margin.

Acadia pushed to a 17-12 advantage and retained the lead until Tiger Julie Moore nailed two consecutive kills to give Dalhousie a 21-20 lead. Lucy Glen-Carter landed four kills in the closing of the third set for the eventual 27-25 win. One of Glen-Carter’s kills broke the 25-25 tie and her last of four ended the match.

Glen-Carter ended with match high 12 kills and a hitting efficiency of 0.355. Subway Player of the Game Jamie Crocket added nine kills for an amazing efficiency of 0.438. Rookie setter Sydney Zakutney handled the playmaking with 31 sets, while Becky Dorsey had a team high 14 digs. Hannah Helm had 3 solo and 1 assisted blocks in the win.

The Axewomen take on Moncton this Monday night in a make-up game that was postponed on Friday due to inclement weather. Next weekend the Axewomen head to Saint Mary’s on Friday followed by Saturday’s season-ending matchup against Dalhousie in Halifax.

The Tigers’ season wraps up with a rematch against Acadia next Saturday night.