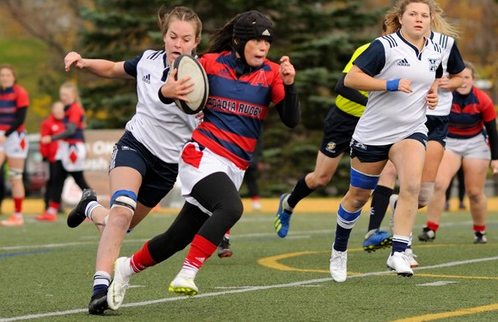 Antigonish, NS – The StFX X-Women claimed the 2019 AUS rugby banner with a 29-17 victory over the Acadia Axewomen in a hard-fought battle in front of over 350 fans at StFX Stadium on a wet Saturday afternoon.

The title marks the 21st conference title in team history for the X-Women.

After the Axewomen built up a 17-12 lead at halftime, Pentz noted “We really focused on our defense coming together and not letting them through in the second half. We worked really hard on this and they didn’t get into our end until the end of the game, so we came out and did what we had to do.”

The X-Women regrouped from the first half deficit to score 17 unanswered points in the second half – holding their opponents scoreless – on route to the win.

X-Women head coach and AUS Coach of the Year Mike Cavanagh commented, “I told them at halftime that we had to stop putting ourselves under pressure. I thought we tackled well in the first half, but we just had to play too much defense and didn’t often have the ball, and every time we got it, we gave it up to them.”

It was a tale of two halves as the Axewomen got out to an early 12-0 lead, putting continued pressure on the X-Women. Annie Kennedy (Kingston, ON) scored in the third minute of play, then AUS all-star center Emilie Merilainen (Batawa, ON) scored in the 11th minute. Laura Pfleiderer (Williams Lake, BC) converted the second try for the Axewomen.

St.FX got on the board three minutes later when center Sammy Nadeau (Bewdley, ON) scored off a nice, long run. The unconverted try brought the score to 12-5.

The Axewomen continued to pressure and were strong off the scrum, threatening to score but the X defense held them back.

The teams continued to battle for the remainder of the half and Acadia scored once again in extra time as Kennedy recorded her second try of the afternoon.

St.FX came out strong in the second half and as Coach Cavanagh noted, “We got the ball and we kept it, and we just put the pressure on them.”

That pressure led to a try two minutes into the half as Franada jumped on a ball off a nice kick from Hannah Ellis (Halifax, NS) and the X-Women drew even at 17-17 as her own convert attempt was short.

St.FX maintained possession in the Acadia end and had several strong scrums. They took their first lead of the game in the 54th minute when Sophie Parker (Windsor, NS) scored off a scrum. Franada’s second conversion of the game gave the defending national champions a 24-17 lead.

They closed out the scoring in the 66th minute as Sarah Hoerig scored off a few nice passing plays off an X-Women scrum.

The second half was highly physical with big tackles as the AUS rivals gave it their all and the X-Women wore the Axewomen down to take the win.

Both teams now advance to the U SPORTS national championship as the AUS conference is guaranteed two berths in the eight-team event. It is scheduled for October 30 to November 3 in Ottawa.

Players of the Game:

Krista McKenna is the Sports Information Officer for StFX University