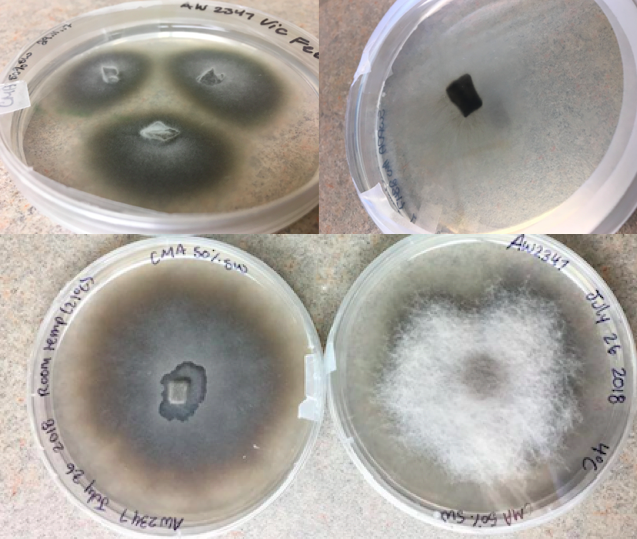 Marine ecosystems are difficult areas to investigate due to their vast ranges, but as a result of technological advancements, our understanding of ocean life including understudied marine microbial diversity is constantly improving. Marine fungi contribute to nutrient cycling as they are major decomposers of organic matter in coastal and marine environments. They reproduce and grow on woody and herbaceous substrates containing chemically recalcitrant lignin and cellulose. Lignicolous marine fungi produce enzymes such as cellulases, laccases, xylanases and peroxidases which decompose woody material.

Some species possessing these enzymes can also degrade complex hydrocarbons, making them of interest for bioremediation of environmental contaminants. Considering 40% of the world’s oil travels by water during the production process, exposing marine and coastal environments to accidental spills, marine fungi have been of particular interest in recent years for their potential use in the bioremediation of crude oil spills in marine ecosystems.

In 2017, the Walker lab at Acadia University isolated a new species of Lulworthia, an obligate marine ascomycete fungus, from recently exposed intertidal wood from Apple River, Nova Scotia. There are currently 13 accepted species of fungi in the genus Lulworthia worldwide. Seemingly the largest genus of the marine ascomycetes, these fungi are often recorded as “Lulworthia sp.” as they frequently cannot be distinguished using long-established morphological techniques. Lulworthia atlantica, a closely related species isolated from submerged wood on the North coast of Portugal, was described in 2017. Using the same methodology, I genetically characterized a new species from the Bay of Fundy using rDNA as well as macro- and micromorphology. Phylogenetic trees were constructed for 3 rDNA gene regions, providing genetic evidence that it is a new species of marine fungus, provisionally named Lulworthia fundyense. The fungus grew faster at warmer temperatures, but sexual spores were not observed in culture, nor in wood block incubations at 4°C or 21°C. Asexual spores were observed and measured after 7-8 months, and I am currently describing this new species. Obligate marine fungi are understudied organisms and many do not sporulate in laboratory settings or only after prolonged incubation periods.

This lack of knowledge on conditions that induce ascomata (fruiting body) production has greatly hindered experimental studies. Previous studies have shown that perithecia formation in Lulworthia sp. generally occurs after 100 to 200 days on submerged wood in environments where water temperatures are below 5°C. As sexual reproduction of L. nom. prov. fundyense was not observed after more than 300 days in our study, this fungus was either not grown in adequate sporulation conditions, or it is slower growing than previously discovered marine species.

To acquire further knowledge on marine fungi, the development of new culturing techniques is required to induce sporulation to better understand novel species. This new fungus is now being tested for its ability to degrade crude oil. If L. fundyense is able to eliminate crude oil residues in the ocean, and we can optimize its growth, this could be an important environmental advancement in oil spill remediation and oceanic health.

The issue of hydrocarbon contamination is significant as an estimated 3.5 million tonnes of petroleum hydrocarbons are introduced into marine ecosystems each year, negatively affecting the invertebrates, birds, mammals, and plants that inhabit these areas. This project emphasized the ecological importance of fungi and the need for further research on these organisms within each of Nova Scotia’s coasts, to identify biotechnological potential and develop new strategies to reduce marine pollution.