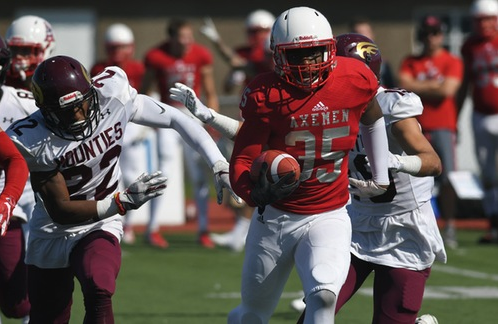 Wolfville, NS – On Saturday afternoon the Axeman beat the Mount Allison Mounties 22 to 15 as they improved to 4 and 0. The Axeman have looked really good this season as second year starter Hunter Guenard has shown that he is ready to lead the team. Guenard leads the AUS in yards per game, total yards, and completions. The Axeman also have the top running back in the league as Dale Wright has dominated defenses posting a yards per game total of 113, along with 5 touchdowns. Not to mention that Acadia’s wide receiving core has shined as Glodin Mulali leads the league in receiving, with Cordell Hastings and Matthew Gledhill both in the top 10 in the AUS.

Their defense has been impressive also as linebacker Bailey Feltmate leads the league in total tackles. As a defensive unit, the team is first in points allowed with just under 20 per game. The team was ranked 5th in the National U Sports Football Rankings last week, and they have the potential to be ranked even higher going forward.

There were some question marks coming into the season after having a less than successful 2018 campaign, but the Axeman have shown they are ready to win this season. Even with the departures of key players like Brandon Jennings, Matthew Nettle, Garvin Cius, and others, the team has managed to assemble a team capable of winning an AUS Loney Bowl Championship.

One of the most impressive parts of the team this year has to be the play of the offensive line. The Axeman lost veteran players Nathan Heide, Drew Seldon, and Jacob Creedon, but have been able to put together a five-man unit capable of making holes for Dale Wright, while also giving time to Guenard in the pocket. Veteran lineman Shelton Williams has looked impressive as he has dominated the line of scrimmage all year long.

The Axeman have 4 games left this season and will look to continue their winning ways as they travel to Lennoxville, Quebec to take on the Bishops Gaiters who are 2-2 this season. The Axeman dominated the Gaiters in their last game as they won convincingly.

If the Axeman can remain healthy, and quarterback Hunter Guenard can continue slinging the ball like he has, the Axeman could find themselves with some hardware this season. Much of the success the team has had to date has to be attributed to the efficiency they have had in the red zone as the Axeman rank first at an 81% conversion rate; and when they do find the red zone, 69% of the time they score a touchdown. With a red zone conversion rate like that, and the limited turnovers the team has had, the Axeman have found a formula for winning this season.

A winning formula they hope to continue as they enter the second half of the season, and prepare themselves for a push to the Loney Bowl, and maybe even, a journey to the Vanier Cup.

Sebastian Farkas is a Fourth Year Politics Student and Sports and Wellness Editor of the Athenaeum.