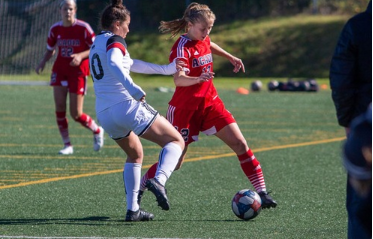 FREDERICTON, NB – The U SPORTS No. 5 Acadia Axewomen got a pair of goals from fifth-year striker Jenna Boudreau (Halifax, NS) to beat the UNB Reds 2-1 on Saturday afternoon.

Boudreau scored in the 34th and 54th minutes.

“We knew coming in that UNB was a really tough team,” said Boudreau. “They’re really strong offensively and they did well defensively, they were disciplined and gave us a really good game.”

The Reds took an early 1-0 lead when Sylvie Fecteau (Moncton, NB) converted a penalty kick in the 17th minute.

The penalty came after Abby Sullivan (Orleans, Mass.) was taken down in the 18-yard box by Axewomen keeper Sarah Charnock (Newmarket, ON). Charnock was given a yellow card on the play as well.

Boudreau brought the visitors even when she was left alone in front of the UNB net and tapped a crossing pass by Reds keeper Brynn Nash (Saskatoon, SK).

The two teams went into the half tied 1-1.

“That was the first time we’d been down all season,” said Boudreau. ” I think it was good for us, in a way, to feel like that.”

Boudreau scored her second just after half-time, tapping a loose ball past a sprawling Nash.

The Reds pressed late but couldn’t find the equalizer.

The Axewomen are now 7-0-1 and see their next action on Wednesday when they visit Dalhousie.